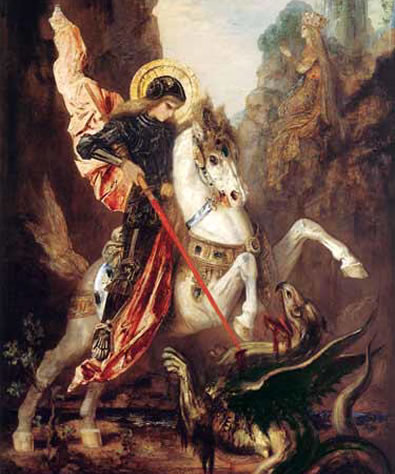 A BATTLE AT LZ ST. GEORGE

If you survived St George, you qualified for "sainthood".  The war was
winding down "politically", but a "real war" never winds down.
This "war story" puts cannoncockers in a position they never
wanted to be in: defending their own firebase.

St. George was a monsoon firebase that the battery used for "hipshoots". The bunkers were above ground with trenching and fighting positions between the bunkers. The 1/14th Inf Regt four-deuces were located at the Quarry down the road. For a short time Charlie Battery was also located at the Quarry.

The battery was down to 5 tubes, having lost one at Chu Pa.  It was across the "road" from the entry gate from the FDC CONEX and FDC hootch. There was a single interior strand of concertina wire around the battery, except for the side facing the road and FDC, mainly to keep the grunts out of the artillery area.  At the time of the attack, two of the guns were on a hipshoot, so there were only 3 present at St. George.

I think Nixon made his 25,000 withdrawal "hardline" speech on Nov 2, 1969, which would have been Nov 3 in Nam. The next night, which would have been the 4th, sappers came through the wire and left behind pamphlets suggesting that we should go home. The attack began shortly after midnight, which would have been the early morning of the 6th, while we were playing Spades in the CONEX.  (It was the only light available other than in the 1/14th liaison bunker). Majority of the fight was over by around 0400 hrs on the sixth, although we got hit lightly that night.  Our casualties (3; 1 or 2 KIA) were from a gunship firing rockets short across the firebase.

For 30 years I thought the battle began when the dinks prematurely started blowing the bunkers before they managed to cut through the wire on the back of the perimeter. It wasn't until I hooked up with "Lizard" again a couple of years ago that I got what seems to be a more accurate version.

According to Lizard, it was his birthday and all of the guys in 3rd Platoon not on guard duty were celebrating his birthday at bunker #1 (across the "road" from FDC and slightly to the right looking out the gate).  The 3rd Platoon had bunkers 1, 2, and 3. When it was time to change the guard at midnight, the guys going on duty on bunkers #2 and #3 were leaving, and Lizard and another were going out to take a piss. There was only one doorway, which was on the back facing the interior of the FB. The guys literally ran into a sapper with a satchel charge. Lizard ducked back in to get his weapon while the other three were wrestling with the sapper, who managed to blow his charge, killing 2 and blowing a leg off the third.

Lizard ducked back out and got into his hole to the left of bunker #1 and first hole to the right of the gate where he stayed until we hooked up to drag a few wounded to the FDC bunker and then he went back to his position until dawn.  He was the only guy on the perimeter on about a third of the perimeter. Apparently about the time Lizard unassed the bunker was when another satchel charge was thrown in.  Bunkers #2 and #3 were also destroyed at the very beginning and #4 was also partially blown.

It seems that this premature setting off of the attack prevented the dinks from being able to just run down the road throwing charges and out a gap cut through the rear wire. In effect, they were trapped inside the wire and we were trapped with them.

I don’t pretend to have a clear recollection of what happened when or a clear sequence of events. For 30 years I had no contact with anyone who actively participated that night (I’m excluding John, who never stuck his head out of the transient bunker). When I started hooking up with some of the guys a few years ago I wasn’t sure what was true recollection and what might have been a product of 30 years of nightmares. I was really surprised by the accuracy of my memories, which coincided closely with copies of the logs from the rear and the after action reports that Lizard obtained and sent me.

In ‘69 we were using the 102 airmobile 105s, not the split trails of prior years. The gun pit parapets were only about 18" high because of the low profile of the howitzer. As I recall, gun 5 ("Ti Ti Sgt" was the Section Chief) was directly across the road from FDC and did not have wire alongside. When I first unassed the FDC CONEX my plan, other than getting the hell out of that trap, was to cover the CONEX entry from gun 5.  Most of the action took place in front of gun 5 and the next section over, which I think was "Dinky Dau" Daud’s old section (#3?) that Sgt Tex Shelton had just taken over as Section Chief.

I don’t remember - if I knew - if it was because of Section 5's exposure or because the gun had been damaged by a satchel charge, but that is where I hooked up with PFC David Gamble and PFC Dale Harris and their M-60 after I retrieved my weapon from the FDC hootch and returned the carbine to poor old Bowdie manning the CONEX. Clint Curry was either with me the whole first part or we hooked up back at the CONEX

For a while Sp4 James Cass and another guy from either Ti Ti’s or James "Tex" Shelton’s section, a converted lineman, was with us. I think "Kool Aid"’s section was in the middle and was shooting illumination rounds until  Spooky  took over. Sp4 Don F. Morrell’s gun section 4 was closest to bunker 4, which was only partially damaged. His Section was on the hipshoot. I can’t remember who’s gun section was at the back facing the interior of the FB and across from the new transient bunker and the mess tent near the ricky rifle on the perimeter, but it was also on the hipshoot.

Tex Shelton says that he remembers beehive being used, but I don’t. I can’t imagine we would be shooting beehive with friendlies possibly still being in front in the fighting positions. In a situation like that we would usually have used firecracker, but I don’t recall that either. I do remember the two guns on the hipshoot shooting for us, which was tricky since they had to shoot over the firebase to the woods on the other side where the dinks were coming from. I don’t remember the four-deuces at the quarry shooting either, but they might have been.

I didn’t realize it until I talked to the converted lineman/cannon cocker a few years ago that the commo had been cut between FDC and the guns, and that he and Clint restrung the wire over the open road (which was part of why Clint got the Silver Star, which I also did not know until talking to this guy). It amazes me how concentrated one becomes when the survival mode kicks in. Everything is both slow motion and superfast at the same time.

What did the gun crews do? They, along with that single strand of concertina in front of the battery area, probably saved the firebase. Delta company was severely understrength to start with, and one Platoon was on the hipshoot. Within the first few minutes, there was only one able bodied grunt on the perimeter from the gate around the perimeter to the backside of the firebase, an area of probably 40% of the perimeter, and by his own admission he was laying low in his hole.

There was no question that the dinks were concentrating their entire effort on the guns, but other than one Clint shot off of gun 5 parapet, none got into the battery.  All of the bodies in that single strand of concertina wire were not dinks, but included troops probably trying to reach the relative safety of the battery when their positions were overrun.

The next morning they quickly pulled in the hip shoot, brought in Charlie company to relieve what was left of Delta, and we policed up the bodies and started tearing down what was left of St. George to do a road convoy move to the Ban Me Thout area. A priest flew out and did a brief memorial service. As I mentioned, we got hit lightly on the night of the 6th (before midnight). The surviving or wounded Delta Company troops were sent humping at first light on the 7th, along with me since I was playing FO for them. I guess they wanted to get us out of there before the press got wind of it and started making their way out.

A couple of weeks later I was laying on the beach in Hawaii with my wife.


Back to War Stories