THAT'S NOT A "DONUT", DOLLY!
Wrong place and wrong time

{Webmaster's Note:  This story is possible only through
the wonderful assistance from "Donut Dolly" Jenny Young.
She located Margi and allowed the "pieces" to be put together.}

Sp4 Rick Ericksen recalls what happened...but, who was the Donut Dolly?
We now know it was Margi Ness.

In regard to that fateful day, let me give you my account. You and some of the other girls came in that day and were visiting with the guys. At some point and time you arrived at our gun parapet (emplacement). You were talking with all of us, but at one point you sat at a table and was talking with a guy named Mike. I am not sure exactly when a Fire Mission was received, but all hell broke loose. I remembered you standing there and we told you to step back and get ready to plug your ears. (By the way we were a 105 mm Howitzer battery.) This is the only cannon with a very large brass shell casing. That being said, when we got the order to fire, you were standing directly in line with the assistant gunner (AG).  He is the one responsible for unloading the shell casing after firing.  It's called a "blind move". When he yanks open the breach by pulling on the lever, the shell casing pops out into his hand.  He grabs the back of it and blindly throws it behind him.  (Speed is of the essence; the brass is collected later.)

Not seeing you in the path,  let alone throwing it blindly, you just happen to be in the wrong place at the wrong time, as the saying goes. As it flew through the air, it went right in your direction and hit you square in the mid section. I remember you bent forward and it knocked the wind out of you. At the same time, you could see a tall circular ring imprinted on your blue uniform. Amazingly, you recovered very quickly and did not suffer and serious injury.

Too bad you did not keep that uniform.  It would make one heck of a souvenir and you could have told your own "War Story" back home.  Well,  that was the story as I remember that fateful day.

Kindest Regards,
Rick Ericksen, a/k/a "Rick Slick", 37 Sierra.
(My call sign when I went out with the Grunts as a RTO/Radio Telephone Operator.) 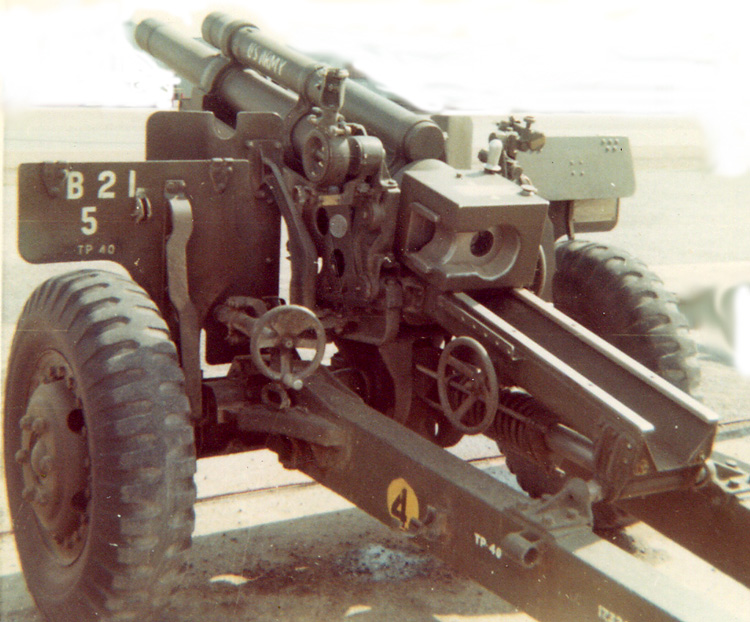 (Fellow Donut Dolly) Jenny Young sent me your email about the Donut Dolly getting hit by the empty 105 shell casing. I am the person in the picture and your account of the event was surprising to me, though I'm sure it had to be me. My recollection is that I'd been talking to some guys and was walking from one gun to another when the fire mission started. Someone yelled "hold your ears", which I did...and the next thing I knew I was thrown in the air and was down on the ground. I thought it was from the force of the exhaust coming out the side of a 155mm, but I was new in country and didn't have any idea what happened with shells, exhaust, etc.  All I knew is that it was loud and forceful and threw me to the ground. I never had any soreness from it and have always been a little concerned I'd have some hearing loss, but that hasn't been a problem.  I always loved going to (LZ) St. George and seeing you guys. Would love to attend your (2016) reunion but I'm in Europe now until mid July so that probably won't happen. Tell everyone hello and That I send my love and thanks.  Margi Ness

Rick Ericksen replies to Donut Dolly Jenny Young after getting key information from her.

Dear Jenny: In response to your e-mail there is no doubt that is exactly what happened. I personally witnessed it. I feel that she (Margi) did not even realize she was hit by the shell casing. The blast wave and the sound hit her simultaneously.  Before she could even realize it and recovered from the effects, she had no idea that she got hit by the shell casing.  I just wish I had taken a picture of it but once the alert sounds and you're going into a fire mission, that's all you're concentrating on.  Lives are on the line here and you have to be concentrating 100% on the gun and the job you're doing. Clearly, no one was really thinking about taking any pictures.

Having said all that, I can only affirm my own experience when I was in training and the first time gun/gun's went off.   I think I ran far enough away where I couldn't see them anymore. Kinda really scares the hell out of you! The most important part is we were all there together and made it back home safe.

With Respect and Honor to all,
Regards, Rick.

Back to War Stories