ARRIVING IN THE FIELD AS A NEW FO
Lt Ed Thomas was not only the guy I replaced, he was a good friend and mentor.  Ed saw how skinny I was and told me that a real combat pack might kill me.  He suggested that I shouldn't try one until I got into better shape for humping through the hills. So he fashioned a sandbag into a small backpack with straps and suggested I use it for a while. You have to remember how skinny those sandbags were.  After telling me to dump the extra clothing, including dyed underwear, he loaded the pack with a poncho liner, a poncho, spare ammo clips, a few hand grenades and some C rats. I snuck in some of the underwear.....but threw them away by week #2. For me, it was a full load for those first weeks.

FIRE MISSION: U-F-O
From LZ Incoming ~ a very busy place ~ in about April [?] '68, I reported lights moving in the sky to the west, across the black line. No one seemed interested at battalion or higher. But everyone agreed that the lights were not ours. I was pretty cautious about firing on them after that unfortunate incident involving a US Navy LST on my very first fire mission in Nam on my first day with C/1/35.

No idea whether we hit anything but the lights disappeared forever. You guys can talk about UFOs and Russian choppers but in my heart, I just knew they were US Navy choppers, still hunting for me after the unfortunate LST accident.  {See Bert's "War Story" entitled "Shore Battery Warfare"}

I went into a tunnel once and 2/9th Bn Co LtCol Gerald Bobzien heard about it.

His "speech" to me when he next visited C Company was a masterpiece of creative butt chewing. The crux of it was to the effect that, after the courts martial, I would be sentenced to cleaning latrines in the base camp for the rest of my tour.

LZ Mile High / LZ Incoming/Tam Ky
I coulda sworn that "my" LZ Incoming was within easy 105mm range of the border – maybe charge 6.  There were a number of times when we fired over the line while there.  And a number of times when we fired on the line, too.  Trees were so heavy that even with fuse delay, getting a round on the ground was difficult.  Charge 6 put the border about 8 k away.  I think the story is right but with the wrong unit on the hill.  We did lose 2 guns for a short time.  One was hit earlier with RPGs before the main event started.  I can’t remember how the second gun was destroyed. The ammo bunker blowing up did as much damage as anything else.  LZ Mile High was the bigger hill overlooking LZ Incoming.  It was cleared off with a "daisy cutter" bombs immediately before the CA.  I think the original intent was to put the battery there but the heavy trees that were blown down were impossible to move and were too big to use as parapet walls, too.  We may have had the battery there for a while anyway before giving it up and moving on to Incoming.  Mile High was as rough a place to be as Incoming but for different reasons. We were surrounded and the enemy was wearing new uniforms, had great equipment and seemed to be far better organized than we were.  After a particularly well staged ambush of one of our companies, I remember taking men from the battery into the ambush area to pick up the dead bodies, discovering that a few very badly wounded were also there. The infantry unit was so chewed up that they couldn’t even provide security for us.  The NVA 325C Division had policed the battle area and put the Americans in one place along the edge of the ambush trail.  I was dead certain they were watching us as we shouldered our weapons and began carrying the bodies back up the hill.  The heavy jungle and huge trees made the hill always seem dark and foreboding – gave us all the creeps.  We were so glad to leave for that smaller relatively bald hill just below us; the one named "Incoming". 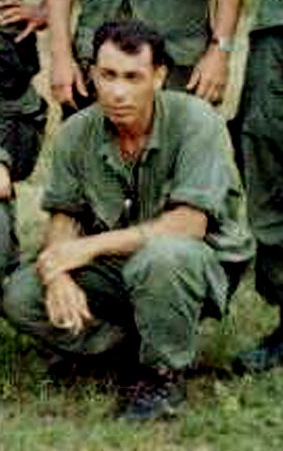 You always hate to hear of those "friendly fire" incidents and it's even worse when you're involved or even just nearby.  You must live and re-live that incident forever.  Lt Tony Bloemhard was lost to a FF incident. Tony had been in the Dutch Army fighting guerillas in the Dutch West Indies or . The most experienced guy in the unit. And one of the very bravest, too. He joined the army to become a citizen. To crawl out into the unknown blackness beyond our own lines and find the enemy positions to our front was an extraordinary act. Every man was informed that he was out there. I didn’t have the guts or the skill to have done that. When the single shot rang out [revealing part of our line], the guy next to the shooter saw what happened and we needed a team to go bring Tony back to us.

The Story of Lt Joel Matusek

It was a dark time when I was trying to deal with the demons and memories that continued to haunt me and wasn’t having much success.    There were others there, too.    When your eyes got used to the dark,  you could see us,  off in the woods.    Hunkered down by the bole of one of the trees,  facing The Wall.    There were a number of suicides there.    I think we were all waiting for our turn.    I finally got past it but it wasn’t easy.    I think it was when the nightmares started becoming familiar after years of reliving some bad things. I’ve often wondered about the number of suicides after we tried to come "home".    From what I saw at The Wall,  there must have been a lot. I think I began recovering when I realized that – in the dreams – my futile attempts to make the dreams go differently and, most importantly, end differently had become predictable scenarios.    Even in the dreams,  I would remember that I had tried the same things to change the outcome many times before and had always failed.