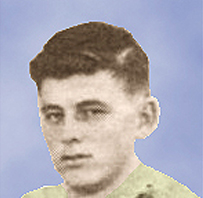 Danny was killed by a "short round" during the
placement of "defcons" on Christmas Day, 1967.
Three soldiers were killed and thirteen others wounded.
Danny is buried at Crestlawn Memorial Park, Riverside, CA

REMEMBRANCE:
Danny  was  initially in  our FO party with B/2/35 as RTO and got promoted to Recon Sgt and went to another company.
------Lt Wayne Crochet, FO, 2/9th FA

Danny Wayne Jeter of Riverside was killed in combat in Vietnam on Christmas morning the Department of Defense announced yesterday. He was 19.

Born in Corpus Christi, Texas on September 8, 1948, Jeter attended Chemawa Junior High School and Ramona High School in Riverside. During his high school years, Jeter’s chief interest was hunting, camping, and fishing. He graduated from Ramona in June, 1966 and on September 8 of that year, his 18th birthday, he enlisted in the U.S. Army. Following Basic Training at Fort Ord, Jeter was sent to Germany. In Germany, Jeter volunteered for duty in Vietnam.

After completing his service, Jeter planned to obtain his college degree and then work for the telephone company.

SP4 Danny Wayne Jeter, was a member of “C” Battery, the 2/9th Field Artillery (The Mighty Ninth) and attached to “C” Company,

2/35th Infantry Regiment as a member of a Forward Observer partY.  Danny died in the service of his country on December 25th, 1967 in Quang Ngai, Vietnam. The cause of death was listed as Friendly Fire, Short 4.2 mortar round, which was defective. At the time of his death Danny was 19 years of age. He was from Riverside, California. Danny is honored on the Vietnam Veterans Memorial at Panel 32E, Line 057.

TRIBUTE FROM ROBERT J. MURPHY
Danny Jeter was a friend of mine at Ramona High School in Riverside, CA. He was one of the first people who was ever friendly to me there. I remember skipping first period class, piling into his black, 40's era coupe and heading down to the local doughnut shop where the "cool and tough" guys would hang out. I was neither cool nor tough, but Danny was at ease with everyone and if I was with him, it was OK. Danny was good with his hands, worked on cars, but was not the world's greatest student. We used to have long talks about life, especially about the Vietnam war, which was heating up pretty quickly in those days, and what was going to happen to us. I think it was pretty clear to him that he would end up in the service sooner than later. I had intentions of going to college, but I was still worried about the draft. I can still remember him saying, "don't worry, Bob, you're smart--you'll make it, you'll be all right..." I used to feel a strange sense of guilt over that, as if he knew he would end up in Vietnam and I wouldn't. (As it turns out, he was right--I did go to college, and am also a Vietnam Era Veteran {Air Force} but did not serve in Southeast Asia.) I remember being a freshman in college and finding out from an LA news broadcast on Christmas Day of 1967, "only one Southern California casuality, today, Danny Jeter of Riverside." I can still feel the state of shock I was in as I watched the news. I never knew the details of Danny's death until I read the remembrance by Colonel George. I must admit, it's very disturbing to find out that he and nine buddies were killed by friendly fire while trying to celebrate Christmas. I guess I always had a more noble scenario in mind, some heroic act worthy of being portrayed by a movie star. Still, I can only imagine what it must have felt like to then-Lieutenant George and the others in his company for their Christmas to be interrupted in such a horrific way. I don't think that there is a week that goes by that I don't think about Danny and what a great guy he was, so positive and outgoing and a friend to all. As I write this, it's Memorial Day and that makes my memories even stronger. This past year my 14 year-old son went on a school trip to Washington DC, and I asked him to make a rubbing for me from the Wall of Danny's name, which I'm happy to say he was able to do. I'm proud to have called you my friend, Danny, and I'll never forget you. God Bless you in heaven.

TRIBUTE FROM THE 35TH INFANTRY REGIMENT

On the Christmas day, Charlie Company was doing what it was supposed to do. Sending out short sweeps just to make sure. Things were kind of quiet. By 1700H, everyone was back in the perimeter and it was time to enjoy Christmas. At 1922H, defcons were called in. One short round, later determined to be defective, landed inside the perimeter of Charlie Co. LT Ronald J. Siengo, from C Co, SP4 Danny W. Jeter and PFC Charles D. McClurg, with the 2/9th Arty, were KIA. Charlie Company also lost 13 other men that night who were WIA; John Wallace, Raymond Rivera, George Rollins, Wilber Gillespi, Thomas O’Conner, Cluris Spivey, Kenneth Westfall, James Boykin, Brooks Woolcok, Noble Smith, Walter Powell, Leland Edelen, and Ted Deviak. I did not know any of these fine men. But every Christmas my thoughts come back to them. I hope the wounded went on to lives filled with joy. I say a prayer for the family of those who did not return from this day. "Friendly fire" has always been a tragedy of war, but knowing that doesn’t make it feel better.

I was just looking at the book I got when I got out of basic training to look up old friends when I looked on line and saw that he gave all . I was in Vietnam 67-68 with the 4th Inf Division we will always be brothers you will never be forgotten.