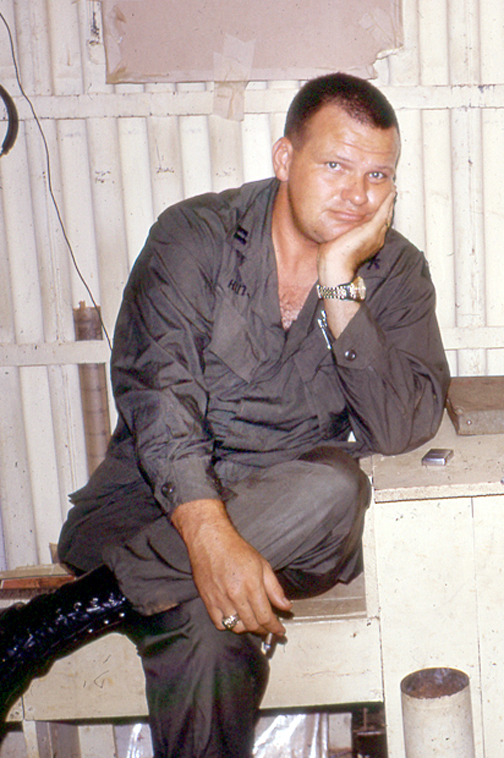 Howard H. (the Dutchman) Hutsell, Jr., Lieutenant Colonel, United States Army Retired, went to meet his Lord and Savior on Friday, August 4, 2017 at the age of 82. He was born near Hoxie, Lawrence County, Arkansas on Sunday, July 21, 1935 (Yes, he was a Sunday's Child) to H. H. and Ruth (Haddock) Hutsell. On his best day he married his lovely bride Melba Maxine Lilly on December 31st 1953 in First Baptist Church at Ft. Smith, Arkansas. He attended school in Little Rock and Fort Smith, Arkansas. He was a graduate of University of Arkansas at Fayetteville (B.A. History) 1961, Oklahoma University at Norman (M.A. Government) 1974 and Our Lady of the Lake University in San Antonio (M.Ed. School Administration) 1990.  Since he was in the first grade when the Japanese attacked Pearl Harbor, and didn't like it, he always considered service to the Nation the highest calling. He proudly served in the U.S. Air Force from 1954 through 1958 ending as a Staff Sergeant. As a distinguished Military graduate of the University of Arkansas he was commissioned into the Regular Army (Field Artillery) in June 1961 and served until June 1985 retiring as a Permanent Lieutenant Colonel. In the Air Force he was a skilled level Jet Engine mechanic and taught Jet Engines. He later worked on and mission scheduled the famed F-86 Sabre Jet fighter. His Army service included hard iron Field Artillery and Infantry in Vietnam War combat, instructor duty including Military Science at St. Mary's University and lots of Operations General Staff. He was Senior Regular Army Advisor to the 49th Armored Division Artillery, Texas Army National Guard. The greatest privilege of his life was to be allowed to command brave young Americans in combat. He thought, with reason, that under his command Battery "C" 2nd Batallion 9th Field Artillery "The Mighty Ninth" was one of the very finest Field Artillery combat organizations in the history of the Republic.  On his second Vietnam War tour he was Executive Officer of a U.S. Infantry Brigade at An Khe and as an Infantry Tactical Advisor was Deputy Senior Advisor to the 47th Infantry Regiment (Rifle) of the Army of the Republic of Vietnam.  He was awarded the Combat Infantryman's Badge, the Legion of Merit, the Bronze Star Medal twice, the Defense Meritorious Service Medal, the Meritorious Service Medal twice, the Air Medal, the Army Commendation Medal thrice, the Vietnam Service Medal with five campaign stars, the Vietnam Cross of Gallantry Medal twice, the Vietnam Honor Medal 1st Class and fourteen other decorations. Following the time immemorial tradition of the Hutsell men he was a life-long member of the Masonic Order. He was recognized as a fifty year Master Mason in July 2009.  He was an Endowment (life) member of Texas Lodge of Tranquility #2000 AF&AM and Kendall Lodge #897 AF&AM, Boerne, Texas (Past Worshipful Master).  He was an over fifty year service Endowment (life) member of Sebastian Lodge #706 F&AM, Ft. Smith, Arkansas, The Van Buren, Arkansas York Rite Bodies (Royal Arch Chapter, Council of Royal & Select Masters, and Commandry of Knights Templar) and the Valley of San Antonio A&A Scottish Rite (32nd degree member).  He was also a member of Boerne Chapter #200 Order of the Eastern Star and of Murat and Alzafar Shrine Temples. He taught at John Jay High School for years and was the Social Studies Coordinator at Pat Neff and Rhodes Middles Schools. He was a longtime member of the San Antonio Liederkranz and the Beethoven Maennerchor. He sang for years in the Choral Choir at St. Gregory the Great. A life-long Christian who demanded baptism at age nine he was joyfully home when he and his precious wife were received into the Catholic Church on the solemnity of the Assumption in 1992. Their wonderful parish was St. Elizabeth Ann Seton. He was a member of the Bejar Caravan #56 of the Order of Alhambra, Immaculate Conception Council #4140 Knights of Columbus, St. Peter the Apostle 4th Degree Assembly #3417 and Monsignor Anthony F. Drozd Assembly #2102 (Past Faithful Navigator). He was preceded in death by the Love of his lifetime Melba M. Lilly Hutsell, Ph.D., his "Ginger." She was his cherished wife for over fifty-nine years and his best friend for well over sixty. He was also preceded in death by his cousin, Leah Dee Haddock. He is survived by his sister, Ann Hays of Jonesboro, Arkansas and her daughters, Marianne Hays of Jonesboro and Shari Hays of Little Rock. He is also survived by his cousins, Earl D. Haddock and wife Linda of Mineola, Texas, Jim Haddock and wife Mary of Jacksonville, Arkansas, Harold Hutsell and wife Nancy of Anderson, Indiana and Joseph Howard Hutsell of Anderson, Indiana. He is also survived by his niece, Kim (Lilly) Evans and husband Dave of Allen, Texas and nephew, David Lilly of Fayetteville, Arkansas. ROSARY TUESDAY, AUGUST 15, 2017 7:00 PM ST. ELIZABETH ANN SETON CATHOLIC CHURCH 8500 CROSS MOUNTAIN TRAIL MASS WEDNESDAY, AUGUST 16, 2017 10:30 AM ST. ELIZABETH ANN SETON CATHOLIC CHURCH Rev. Msgr. Conor McGrath will officiate. Pallbearers will be Earl Haddock, Jim Haddock, Johnnie Tanner, Dave Singleton, Dave Groepler, Clarence Smith, and Al Zambrano. Private interment under the auspices of Kendall Lodge #897 AF&AM and Full Military Honors will follow in Fort Sam Houston National Cemetery. You are invited to sign the Guestbook at www.porterloring.com

I did not realize that Capt. Hutsell had passed away. I contacted him prior to our first two reunions and enjoyed our conversation but he declined to attend and I sensed that reunions were not his thing.

I was Dutch's second XO in C Battery, having replaced Jon Kuney who rotated sometime in October or November 67. But before the XO and FDO jobs, I would regularly visit with him even when I was FO with B  2/35. I was always glad to close on the battery position to get in a visit and dinner with  Capt Dutch. He was an excellent officer and he and the 1sgt had the battery squared away. I will never forget how upset he was about Danny Jeter's death on Christmas Day. I also remember how he and 1sgt would rotate the trips back to base camp to give everybody a break when they could.  In my recent discussions with him, we discussed his second tour and the differences that a field grade officer faced compared to the more hands on job  of a captain. He was a great story teller and a great officer and gentleman, a person who I have admittedly tried to emulate in my lifetime. WTC