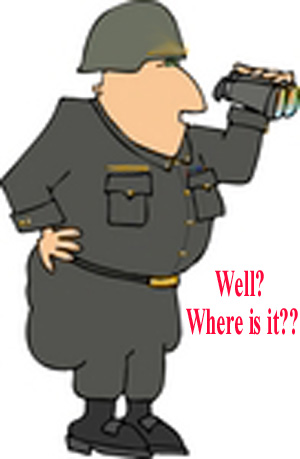 There was an ROTC cadre member back in the 60s who taught a class in proper military radio communications.  He took this stuff very seriously.  He began the class by mocking the post-World War II Hollywood movies and those directors who had no idea of what proper military radio procedure was all about.  He said that a typical "Hollywood" movie radio transmission went something like this: "Roger, dodger, you old codger....over...under...and out!"  He was really tipped over backward that Hollywood could be so crass, ignorant, and stupid about proper military radio transmissions!   Kinda proving why he was the least-liked cadre member in the first place; he got bent out of shape easily.

But...his point was valid.  Good, proper radio transmissions saved time and improved message accuracy.  I was impressed, when using the radio in Vietnam, how it seemed we all had the same training and we did a good job staying on protocol with our terms, acronyms, and codes.  However, that doesn't mean everyone followed every protocol!  I can tell you that EVERY Forward Observer and EVERY man in the FDC knew a "radio transmission code" that you won't find in the SOI/SSI or in the artillery manuals at Fort Sill.

That "radio code" concerned an FO calling for an artillery round that didn't land where it was supposed to.  Especially when that FO felt he had solid data and thought maybe the FDC guys "screwed the goose".  It was "our" SOP  for the FO to look/wait for the round.  If he could not find it, he would radio back to the FDC: "What the f**k, Over?"  To which the standard FDC response was: "What the f**k, Wait".

That's it!  There you have it!  In a very short, terse transmission, the FO was saying: "I think the round didn't land where I asked for it...you might have a firing error here".   In turn, the FDC was saying: "Okay...we'll check and let you know."

Simple....straightforward...and nobody got their nose out of joint until the problem was found.

Just another one of those things that "only those who were there" would ever know about!

So now you know.