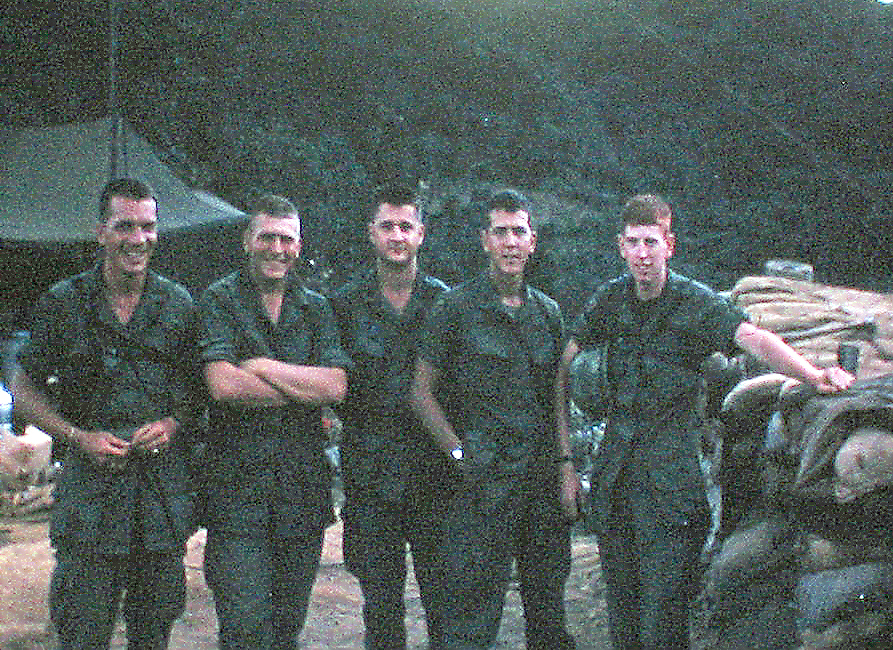 The years go by and memories fade.  They might be forgotten, but the 35th Infantry Regiment's annual Reunion has brought back many of these faded memories.  I found some old VN slides and seeing these pictures brought about this article.  I decided that some of these memories should not be forgotten and this article is one of those.  I hope you receive it in the spirit that I convey it.

The picture above is of the Delta Battery Officers at one time.  Delta, as did Alpha, Bravo and Charlie, had several sets of officers from time to time.  I served in 2/9th in 66, 67 & 68.  I was a career FO until I made Captain and couldn't go out anymore.  I served with all 4 batteries as well as being an FO for 1/35th, 2/35th, and even 1/14th for a while.  When we finished a mission or had been out for a long time, we rotated in and our Infantry Company would guard the Firebase and the FO could go hang out at the battery.  In this picture, Chris Herrick was the BC, Bill Farmer was XO, Doug Turner was FDO and Dave Whaley & I were the FO's who just happened to be in at the same time.  We didn't have a lot to do as we were probably covering BN and not in direct support.  It was a time to rest and relax and tell stories, but when you have told all the stories, lies, etc., for at least a couple of times, you get bored.  When bored, we listened to the radios for excitement (that is truly desperation).  We would listen to the Infantry pushes to find any action and the Bn Arty push in case they fired for someone outside the Bde which happened sometimes.  When a Company came into contact, we would check the SOI and get on the Company push and the FO's frequency to hear all sides of the fight.  This is what we were doing one afternoon when the fight started.  We cheered "our FO" and followed closely the progress of the battle.  It continued into the night and we got real worried when we no longer heard the FO.  The LNO was immediately in the air and we heard the sad news that the FO was KIA.  There was no recon SGT and the RTO, who was an Sp/4,  could not adjust fire.  The Infantry CO requested another FO and in minutes, we received a call from Bn to have an FO on the pad at first light.  The BnCo's chopper, an H-23, would take the FO to the support Platoon who would take the FO to the Infantry Company.  His mission would be to immediately re-start artillery barrages again to allow the Infantry to withdraw the wounded so the Bn surgeon could operate and save some lives.  {Sidebar: That surgeon attended the last reunion in Philadelphia in 2007.}

Dave Whaley was called back to his Company as they were going in on a flanking maneuver.  That left me as my company was staying on Firebase security. Bill Farmer said to me, "I want to VOLUNTEER to go on this mission.  I was a Sgt in the 82nd Airborne before OCS and I know what I am doing."  I wasn't one to argue and besides, Bill outranked me!"  (poor excuse isn't it?) We had to get Chris' permission.  He reluctantly agreed, but told Bill to be back within a week and that he would be working on his replacement immediately.  Bill left at first light and it wasn't anytime until he had the artillery on target and the troops withdrawing to get medical aid.  Chris was also on his job at getting a replacement and he had one located before the day was out.  Before any replacement could be coordinated, Bill's unit got into another fight with the same NVA unit that they had just broken contact with.  The fight went on into the afternoon and we got word that Bill was KIA.  He didn't have to go, but that was Bill....he was always a VOLUNTEER.

We talk about personalities over time, about who we did and did not like, but we were always willing to fight for our comrades in arms.  One reason for this website, is that we must not forget those who we fought with and especially those who paid the ultimate price for our freedom.  Chris had us come into his tent when he wrote to Bill's wife in North Carolina.  He tried to say it right.  I don't know if he got it right in words, but we sure had it right in our hearts, then and now.    God bless you Bill.  We have not forgotten and we never will.